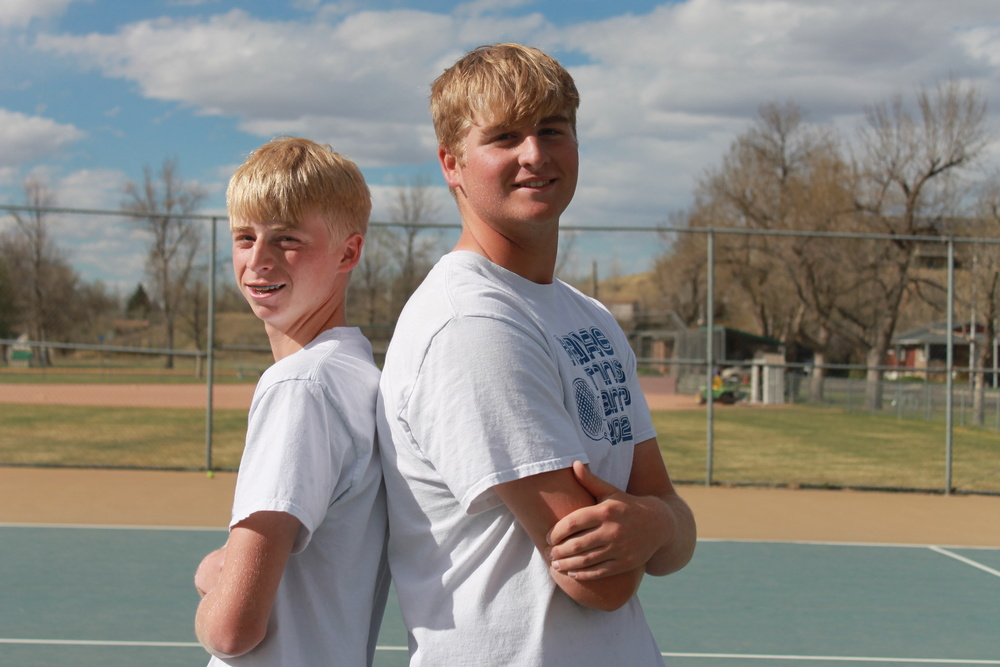 Sports are a great opportunity to build bonds and create friendships that last a lifetime. But sports can also build upon the bonds that are already established such as a brotherhood. Brothers Caleb and Carter Spangler have grown closer together as they play basketball and tennis for Havre High School. They already had a lot in common, but they cherished the opportunity to get to play with each other over the years.

“Not a lot of people can say they did something with their siblings like playing high school sports with them,” Caleb Spangler, a senior said. “It’s just a cool connection that we can share and I always have someone to play with.”

Caleb is a senior for the Blue Ponies and has been one of the best players over the last two seasons. He began playing tennis his sophomore season because his friends and his golf coach, George Ferguson, convinced him to join the team. However, that season was canceled because of the COVID-19 pandemic, so he had to wait until his junior year to play. Despite the wait, Caleb made an immediate impact when he finally got on the court.

“Caleb has had one of the most rapid ascents in tennis I’ve ever seen. He started as a sophomore but that got taken away, but by the end of last season, he was already one of the top players in Class A,” HHS tennis head coach Ferguson said. “Even with all the other sports he plays, Caleb lived at the courts. I think he really got addicted to tennis and it shows because he is really, really good.”

During the COVID-19 year, Caleb spent much of his time practicing in the court at night to prepare. The work paid off last season as he earned all-conference honors in doubles alongside his partner Theron Peterson. While he did not know if he would enjoy tennis when he first joined the team, he has quickly taken to it.

“It was awesome. I didn’t expect to excel that quickly,” Caleb said. “I always like to compete and I love winning. It’s just another thing for me to do and try and get better at.”

“I didn’t really try to teach him anything. I just let him watch. I think that’s the best way to teach anyone is to lead by example and just show him what to do,” Caleb said.

From observing his brother, Carter feels like he picked up on a few things that have helped him on the court.

“I learned that every shot counts and I learned that your mindset is a very important thing,” Carter said. “When it’s a close game or close match, you really just got to stay cool, calm and collected and focus on that next shot.”

The lessons he has learned has helped Carter get off to a strong start to his career just like his older brother.

“Carter pretty much came right in and did the same thing. He got hooked, he started putting in a ton of extra work and it has totally paid off because he’s a really good player,” Ferguson said. “In a way, they’ve helped each other become really great tennis players.”

Carter made the varsity team his freshman year and helped the team win divisionals last season. While he lost in divisionals to fall short of a spot in state, Caleb made sure to remind his little brother that he had a long career ahead of him to accomplish his goals from him.

This season, Carter has teamed up with Peterson for doubles while Caleb is partnered up with Trenton Maloughney for doubles. While the brothers could have played together, Ferguson believes it was for the best they teamed up with different partners.

“I wouldn’t have been opposed to trying it but I just think that it would maybe have put too much pressure, probably on Carter being the younger player. I’m not sure the chemistry would have been right and that’s OK,” Ferguson said. “They are thriving with their own partners this season and they both have a chance to do great things in the next couple of weeks. But no doubt, if they had played together and had gelled, they’d be one heck of a tough doubles team.”

If they had been able to play together, fans would have been able to see their different personalities in court. Caleb is the more expressive of the two brothers while Carter is more reserved with his emotions than him.

“I’m the fire and he’s the ice,” Caleb said. “I get a little emotional and I get upset while Carter doesn’t seem to do that as much so he’s pretty calm most of the time.”

Playing on the team together has driven their competitive spirit. As the older brother, Caleb believes he is the better player at the moment. But as Carter gets more experience, Caleb believes he will be overtaken by his younger brother as the superior tennis player.

“I’d say just because I’m older, I still have the upper hand,” Caleb said. “But he’s close. I’m sure by next year, he’ll be better than me.”

Carter credits the competition between him and his brother for pushing him to become better.

“I think we’re both pretty competitive people, especially between each other,” Carter said. “I think that’s really special, to have someone who drives you every day. Even if you don’t like him sometimes, you got to love him.”

“Caleb and Carter are a typical big brother/little brother duo playing on the same team,” Ferguson said. “They don’t always get along, and I do have to referee that sometimes. We’ve had tons of sibling pairs in my 20 years, though, so that’s not a new development. I just always try to remind them that, at the end of the day, they’re family, and they’re brothers and that’s the most important thing.They look out for each other and care about each other, even if they don’t always get along, and they do that on This team. The whole team does, and they definitely do look out for each other. Playing with your brother or sister in this program is special. We’ve had tons of those situations over the years, and I think it’s really cool that these guys get to be a part of that. It’s special and it’s something they’ll have together forever.”

Just like any pair of brothers, Caleb and Carter spend much of their free time together. Outside of the sports they play together, they play everything from video games to ping pong together. They have also gotten the rest of their family involved in tennis. Their younger brother, Max, is set to join the team as a freshman next year, so tennis is becoming a feature of the Spangler family.

Both brothers will be looking to end the season on a strong note. For Caleb, these last few weeks will be his last with the Ponies. Once he is done with high school, he will attend Carroll College to play golf.

“I’m excited to just keep playing golf at the next level. I love golf. I do it every day and I can’t get enough of it,” Caleb said.

In his sophomore season, Carter will be looking to improve on his performance from last year and make it to state. He is also enjoying these last few weeks of the season with his brother Caleb. Once his older brother is gone, Carter will step up and help Max when he joins the Ponies.